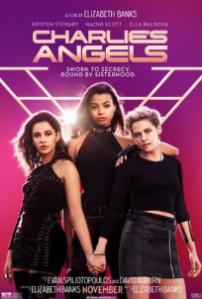 Another reboot of the TV classic “Charlie’s Angels”. I guess it’s if you don’t succeed try, try again until you do.

Sabina, Elena and Jane are working for the mysterious Charles Townsend Agency that has successfully taken the security and investigation business International. There are many “Bosley’s stationed around the world.

Elena is a Systems Engineer for a scientific company who has developed a device that can be told what to do and the device will do it. This includes everything from turning on lights to killing people… Of course the device falls into the wrong hands and there are many people trying to buy or get their hands on the device at any means possible. So in comes Charlie’s Angels to the rescue. The story unfolds from there…
The plot is good, it’s the execution of the plot that is the problem with “Charlie’s Angels”. The story has holes that don’t get filled. The cinematography is not that great. There are some missed opportunities to showcase places like Istanbul and London. Some of the action scenes are hard to follow. There is also some bad acting that also contributes to the problems with “Charlie’s Angels”.

Charlie’s Angels is best left on the small screen.

We can watch the reruns of the original Charles Townsend Agency.