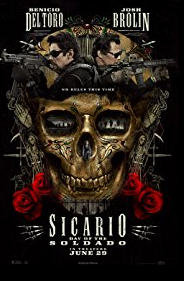 “Sicario: Day of Soldado” starts a new chapter in the continuation of the first installment “Sicario”. The team is faced with a new battle in the ongoing drug wars where there are no rules and regulations. Everything and everyone is fair game. The team has been tracking the Mexican Cartel who has been trafficking terrorist across the border into the US.

In an attempt to get to the Cartel, Matt Graver (Josh Brolin) calls on his old buddy Alejandro (Benicio Del Toro) whose family was murdered by a Drug Cartel Kingpin to help the team escalate the war between the Mexican Cartels. The story unfolds from there…

There is never a dull moment in “Sicaro: Day of Soldado”. The movie is bloody and “In-your-face” violent. As long as the story stays true to its self, everything is fine, but there are a few detours that throw the movie a bit off track and that is why it’s not quite as thrilling as the first installment, but none the less it’s worth seeing as there are a few surprises at the end. 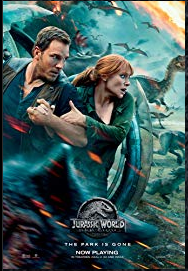 More Dinosaurs… It’s been over three years since the last installment “Jurassic World”. The town, village and area were destroyed by the Dinosaurs that were in containment there during that time.

Fast forward to today the land is mostly a jungle where the Dinosaurs that survived feed on themselves. Owen (Chris Pratt) and Claire (Bryce Dallas Howard) are approached to mount a rescue to save the remaining Dinosaurs from extinction. Owen wants to find “Blue” his lead Raptor who has been missing since the fallout started in “Jurassic World”. A team is assembled and they all head to the island, but a volcano erupts and causes a stampede. The story unfolds from there…

“Jurassic World: Fallen Kingdom lacks punch and dynamite. The story is just ho-hum. There are a few laughs and you will find yourself rooting for the Dinosaurs at times. The bad guys are just plain boring. There are a few twists and turns, but those are not enough to make the movie edge of your seat entertainment.

A bit more thought should have been given to this installment. This installment is by far the worst one. That in its self is very disappointing. 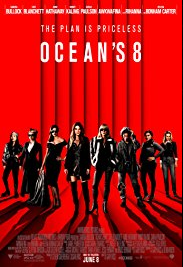 Upon exiting prison, the estranged sister Debbie (Sandra Bullock) of the infamous conman Danny Ocean puts together a team for a brilliant heist that not only involves stealing some of the world’s most priceless jewels from the New York Met, but also allows Debbie to get revenge on an old boyfriend who caused her to end up in prison in the first place. The story unfolds from there…

“Ocean’s 8” is a nice change of pace from the usual norm on a comedy crime caper. There is an excellent cast, but the story is a bit weak in spots. It starts off great, but unfortunately fizzles during the last 30 minutes, but not enough that you shouldn’t see it.