“A Simple Favor” was not on my original watch list but, its Alfred Hitchcock meets “Gone Girl”.

Two women become unlikely friends when their young sons attend school and play together. Stephanie (Anna Kendrick) is a Mom/Blogger and “June Cleaver” without a husband. The other woman Emily (Blake Lively) is a Public Relations professional and a wife.
Stephanie and Emily start spending a lot of time together and during these times their share information and stories about themselves and things that have happened in their past.
One day Emily reaches out to Stephanie asking her if she could do a “Simple Favor” for her. Stephanie agrees to do the favor, but then Emily’s sudden disappearance causes Stephanie and Emily’s husband Sean (Henry Golding) to come together to try and figure out what exactly is going on. The story unfolds from there…

The movie is full of twists and the movie itself is very twisted. This is a thriller of epic per-portion. There is a cloud of mystery throughout the movie.
Alfred Hitchcock would be pleased.

I was surprised at how well the movie was executed. “A Simple Favor” is definitely worth a look. 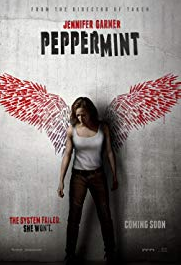 Riley (Jennifer Garner) leads what seems to be a normal life. She has a young daughter and a husband who loves her. Riley’s husband appears to be on the edge of doing something that is on the wrong side of the law. At the last minute he backs out.
The family decide to celebrate their young daughter’s birthday at the amusement park. After riding a few rides, they get ice cream. Riley goes back to get a few napkins, Father and daughter head toward the car. A dark sedan cruises by and opens fire on the Father and daughter, Riley runs to them and also gets shot. The story unfolds from there…

“Peppermint” is filled with intrigue, drama and suspense. There are a few holes and the back story on the husband is missing, but the move is very entertaining and you are riveted to your seat. I personally love seeing Jennifer Garner in action/drama roles. She appeared in “Peppermint” as I remember her in the ABC hit “Alias”.

I am not sure why the “Paid Critics” were so hard on “Peppermint”. It’s not as dismal as they make it seem. It is Vigilante at its finest!!

If you enjoy “Action/Drama/Suspense, “Peppermint” is worth a look. 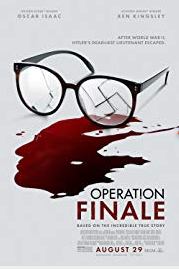 Fifteen years after the end of WWII the Israel Intelligence agency launched a secret mission to capture the notorious Eichmann (Ben Kingsley). Eichmann had been reported dead following the Nazi Germany’s collapse but was, in fact living and had a wife, 2 sons and was working in a suburb of Buenos Aires, Argentina under an assumed identity. Once he was discovered, the agency put together a team and started watching Eichmann’s every move and planning when they could actually grab him. The story unfolds from there…

Based on a true story, Compelling, Suspenseful, Slow and Intriguing are the best ways to describe “Operation Finale”. The title of the movie is very fitting. Capturing Eichmann was a “Finale” for a lot of people who survived WWII.

Ben Kingsley was stellar in his performance. If you can stand seeing the events of WWII Nazi unfold in front of you check out “Operation Finale”.