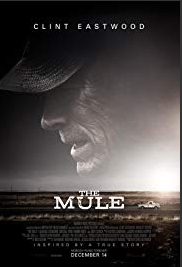 Set in Peoria, IL, an 80 year old Day Lily Grower, Earl Jones (Clint Eastwood) with a thriving award winning business soon finds himself down on his luck and in foreclosure. He packs up his possessions and goes to visit his youngest daughter, Ginny (Taissa Farmiga). While visiting Ginny Earl has a confrontation with his estranged wife, Mary (Diane Wiest) and his oldest daughter, Iris (Alison Eastwood) who will have nothing to do with him. When Earl is leaving Ginny’s home, one of her guest approaches Earl and gives him a card and tells him to contact the name on the card because he can get some work through this person. Upon contacting the mysterious person Earl soon becomes a “Mule” for a Drug Cartel. The story unfolds from there…

The story is entertaining and moving. This is Clint Eastwood’s 38th film as a Director. The story tackles real life issues such as aging, family illness and working as a true Senior Citizen really late in life. There is even some comedy relief.

Clint Eastwood still has the ability to make an excellent vehicle and “The Mule” is definitely worth seeing.