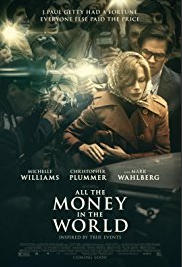 J. Paul Getty believes the kidnapping is a ruse that will allow his grandson to gain access to his fortune, but as it turns out that is not the case. Precious time is wasted and the grandson is held for months. As time races on the kidnappers become desperate, volatile and decide to send the authorities a message. Gail and Getty’s advisor (Mark Wahlberg) become allies in a race to save the grandson’s life. The story unfolds from there…

“All the Money in the World” is a thought provoking mystery with a philosophical punch that shows no mercy. There is plenty of Mystery, Suspense and Intrigue to keep you entertained.

Christopher Plummer is brilliant as J Paul Getty. Michelle Williams and Mark Wahlberg bring a fresh perspective to the story.

“All the Money in the World” was not on my original “Watch List”, but the movie is definitely worth a look.