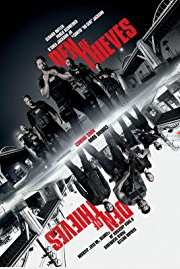 The Los Angeles Branch of the Federal Reserve takes roughly $120 million dollars out of circulation and destroys it every day. There is an elite band of bank robbers who believe they can pull of the ultimate heist and get the money before it’s destroyed, but they will have to do it under the noses of LA’s most elite Law enforcement group. The story unfolds from there…

“Oh What a Tangled Web We Weave When We are Trying to Deceive.” That about sums up “A Den of Thieves”. With the exception of a few dead spots the movie is entertaining, full of suspense, action and intrigue. There are a few surprise twists and turns also.

The paid critics were “Luke-Warm” about “Den of Thieves”, but I thought it was pretty good. It’s an enjoyable “Heist Drama”.

If you enjoyed the 1995 movie “Heat”, I say throw caution to the wind and check out “Den of Thieves”.

There is no subtlety in this Michael Bay Production!

Based on a true story, “13 Hours: The Secret Soldiers of Benghazi” provides the detailed account of what really happened in Benghazi in September 2012.
What’s really good about this movie is that there is no politics. The White House and Congress are not involved. This is purely a military and CIA covert operation.

Since this is a Michael Bay production (the Producer of such movies as Black Hawk Down and The Transformer Series), the action and combat sequences could be questioned as to whether there was more or less in the real events. You do get a thrilling ride from all of the action and combat, but who really wants to relive another person’s worst day in their lives. This is what we are treated to in these types of movies. The movie at times is very bloody.

Telling these stories is ok, but now we know who the “Secret Soldiers” are. In the credits the real Soldiers faces are not shown, but names are given. This movie does not make our soldiers look like Hero’s although it should have. Medals and awards were given, but in secret.

I would have to say that of all the Michael Bay Productions, this is probably his best effort.