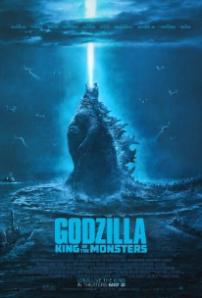 It wouldn’t be summer without a Blockbuster Monster Movie to open the season. It looks like “Godzilla: King of the Monsters” is wearing those shoes…

New story centered around the efforts of the crypto-zoological agency Monarch as its members come in contact with and have to battle a wide range of god-sized monsters, including Godzilla.

Godzilla collides with Mothra, Rodan and his ultimate nemesis, the three-headed King Ghidorah. When these ancient super-species whom were thought to be mere myths actually rise again, they all vie for supremacy, leaving humanity’s very existence hanging in the balance. The story unfolds from there…

New Story, same outcome. It just took a bit longer to get there… This story involved Scientists actually harvesting the monsters in specific locations around the world and trying to control them via sound waves and other scientific technology.

The monsters that Godzilla fought were a lot more menacing than Godzilla himself. The movie was slow and dragged painfully to the ultimate fight. I found myself a bit bored and ready to leave before the movie was over. At the end, I left disappointed. There are other Godzilla installments that are way better than this one. I even saw this in AMC Dolby which means you feel everything in your seat.

“Godzilla: King of the Monsters” is not the movie to start your summer movie going experience with.