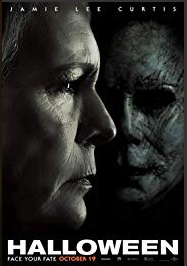 Finally!! I am back on the Movie Review Train. I do not usually see/review horror movies, but my husband is a HUGH Michael Myers fan, so I treated him to the latest installment in the franchise.

It’s been 40 years since Michael Myers first killing spree. Jamie Lee Curtis returns as Laurie Strode who narrowly escaped being killed by Michael Myers in the first installment back in 1978. Laurie has had time to prepare. She has expected Michael to one day return and pick up where he left off.
During a transport Michael Myers and a number of his Institution mates escape. The story unfolds from there…

This is hands down the best installment since the franchise started. There are a lot of characters, the back story is well laid out and Jamie Lee Curtis reprising her role as Laurie Strode 40 years later is genius. You get a chance to see how badly Michael Myers affected Laurie and what she did to cope with the situation all these years.
It’s edge of your seat suspenseful during the last 35 minutes.

If you saw the 1978 installment of Halloween, then you should definitely see the 2018 installment. 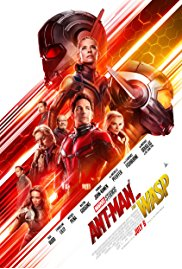 “Ant-Man” is funny and silly, nothing like “Infinity War and Black Panther” where there is an emotional investment in the characters.

This second installment of the “Ant-Man” franchise sort of picks up where he left off in the first installment, but also including “Ant-Man’s” appearance in “Captain America: Civil War”.

Currently Scott Lang (Ant-Man) (Paul Rudd) is under house arrest. He has two days left and he will be free, but Hank Pym (Michael Douglas) and his daughter, Hope Van Dyne (Evangeline Lilly) need the Ant-Man’s help.
“Ant-Man” has a dream about Hank’s wife Janet Van Dyne (Michelle Pfeiffer) who went missing after a mission some twenty years ago. Hope somehow removes the ankle bracelet from Scott and gets him out of his house without the local authorities being alerted.
On another front there is someone from Hank’s past who could use his help but doesn’t ask the usual nice way. The story unfolds from there…

“Ant-Man and the Wasp” has several small back stories that come together nicely to provide context and intrigue for this installment. The movie is funny, silly and interesting simultaneously. The cinematography and special effects are great. “Ant-Man” shows more range in this installment which makes his character a bit richer.

There is a small dead spot in the movie and that’s what keeps it from being 5 stars. It’s definitely worth viewing if you are a Marvel fan.

The 15:17 to Paris” is based on the Aug 21, 2015 real life event where a would-be terrorist boards a High-Speed Train that is bound for Paris. During travel the terrorist attempts to kill passengers on the moving train, but the attack is thwarted by 4 very brave men, 3 of which are Americans who were traveling together thru Europe.

“The 15:17 to Paris” would be excellent if it weren’t for the choppy back story that ensues before you get to the main story. The movie is definitely worth seeing. There is some very nice cinematography.

The paid critics were really Luke-warm about the movie, but it’s not all bad.

Finally the long awaited next installment in the Jurassic Park Series has finally arrived!!

“Jurassic World” is a thrilling ride!! It’s definitely edge of your seat entertainment. The cinematography and special effects are very good and there is a lot of action.

The absolute best elements of “Jurassic World” are actor Chris Pratt and the T-Rex’s. The remaining cast-of-characters are very underdeveloped. Bryce Dallas Howard appears to me as if she is afraid to act or show any emotion in the movie. The story is a bit sketchy. You are not really sure what the plot is.

Although the characters are from the famed writer Michael Creighton’s books, his stamp is not as apparent as in previous installments.
If you are a fan of the Jurassic Park franchise, by all means do see “Jurassic World”. It’s a definite must see in IMAX, but not 3D.

Caesar and his colony are back!

Continuing from the 2011 installment “Rise of the Planet of the Apes” there was a war brewing and the Simian flu all but wiped out most of humanity. There are some humans left. They are in San Francisco and trying to survive. Caesar wants to live peaceably, but there is dissention amongst his colony.

The people in San Francisco have no idea that there are apes living near them. It’s been determined that in order to restore power to the city a tactical team will need to travel into the deep forest to a location where a power plant and dam exist. What they don’t know is that Caeser and his colony have established a home right next to and around the power plant.

In order to get to the power plant and get the dormant dam operational, the team is going to have to deal with Caesar and his colony. One of the young apes is mistakenly shot by a human who feels threatened. This causes a bit of an up rise, but Caesar convinces the colony that the humans are not a threat and they should remain apart. The tactical team temporarily retreats, but after regrouping they return to the forest in an attempt to get to the dam. The story unfolds from there…
This is another one of those franchises that I am “Luke Warm” about. I did not care for the first two installments choosing to watch them on cable as opposed to spending money in a theater. This installment wasn’t even on my “Watch List”.

“Dawn of the Planet of the Apes” is a must see in IMAX, but not 3D.

This is a 4 Star movie