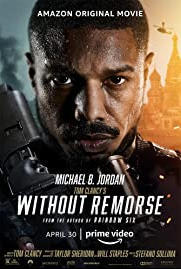 A Tom Clancy movie that’s not on the Big Screen.

At first, I was upset that “Without Remorse” did not come to the box office. Give me a break!! This is a Tom Clancy book come to life, so I expected to see it on a big screen, but none the less it’s available on Amazon Prime.

Tom Clancy’s “Without Remorse” is about an Elite Navy Seal who uncovers an International Conspiracy while seeking justice for his murdered wife and unborn child. This is the explosive original story of John Clark who is one of the most popular characters in Tom Clancy’s Jack Ryan Universe.

A group of Russian soldiers kills Sr. Chief John Kelly’s (Michael B. Jordan) family in retaliation for his role in a Top-Secret Ops. John Kelly makes it his personal duty to get revenge at all costs. The story unfolds from there…

As you would expect Tom Clancy’s “Without Remorse” is action packed from the start. I wanted to love it, but unfortunately the main characters appeared flat and uninviting. I stayed with it for the action, suspense and intrigue.

It’s probably just as well that it’s not on the big screen, but this is a Tom Clancy installment and Tom Clancy’s books are awesome! This installment to the screen just missed its mark.

Check out Tom Clancy’s “Without Remorse” streaming on Amazon Prime or wait for it to come to cable.