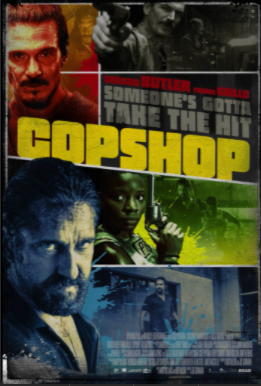 On the run from an Assassin, a wiry Con-Artist devises a plan to get arrested so he can hide out in the local jail. But when the Assassin shows up and is also booked and placed in a nearby jail cell, a rookie cop gets caught in the cross hairs. The story unfolds from there…

Actress Alexis Louder is absolutely stellar in her role as “Harper”. Actually, she is what keeps the movie interesting. There is action, but it is BLOODY!!

There is a combination of Director’s Guy Richie and Quinton Tarantino influences at work here. But with all of that and the great acting, the story is still lacking. There are many pieces to the puzzle that somehow must have fallen on the cutting room floor.

“Copshop” is only available in Theaters. 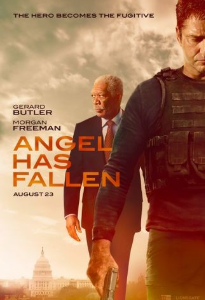 “Angel Has Fallen” is a good Action/Adventure flick with a tightly wound plot that unravels it’s self at the end.

Not everyone agrees with President Trumbull (Morgan Freeman) of the United States on his views about war and combat. Little does the President and his Security Detail know that the trouble maker is right in the President’s cabinet. When there is an Assassination attempt on President Trumbull, his best and most experienced Secret Service Agent, Mike Manning (Gerard Butler) is framed and ends up on the run. The story unfolds from there…

As I stated in my opening lines, “The plot is tightly wound”. You will scratch your head for a while trying to figure things out. Once it becomes clear everything goes downhill quickly.

There is lots of action, suspense and intrigue and some nice cinematography. There are times when the scenes will get on your nerves and you will want to wring your hands. That’s the reason “Angel Has Fallen” is not a 4 or 5 Star movie.

That being said, “Angel Has Fallen” is an enjoyable movie and still worth a look.

“Hunter Killer” is a fresh take on “The Hunt for Red October”. Unfortunately the plot is weak and the back story virtually non-existent.

Deep under the Arctic Ocean lies a US Submarine in distress. American Submarine Captain Joe Glass (Gerard Butler) has been requested to take on the mission of locating the distressed Submarine.
While on this mission Captain Joe Glass and his crew must deal with being fired upon by Russian ships and Submarines, a booby-trapped Ocean and a possible coupe taking place in the Russian Government involving the Russian President. In addition to the undersea mission an elite team of Seals are formed to help out. The story unfolds from there…

The movie is intriguing and very suspenseful, but the plot is lite and the back-story non-existent. The movie is still entertaining and worth a look. It is not as bad as the paid critics made it out to be.

The Los Angeles Branch of the Federal Reserve takes roughly $120 million dollars out of circulation and destroys it every day. There is an elite band of bank robbers who believe they can pull of the ultimate heist and get the money before it’s destroyed, but they will have to do it under the noses of LA’s most elite Law enforcement group. The story unfolds from there…

“Oh What a Tangled Web We Weave When We are Trying to Deceive.” That about sums up “A Den of Thieves”. With the exception of a few dead spots the movie is entertaining, full of suspense, action and intrigue. There are a few surprise twists and turns also.

The paid critics were “Luke-Warm” about “Den of Thieves”, but I thought it was pretty good. It’s an enjoyable “Heist Drama”.

If you enjoyed the 1995 movie “Heat”, I say throw caution to the wind and check out “Den of Thieves”.

“Geostorm” is one of those movies that shows you all the best parts of the movie in the trailers so that when you go see it, it’s just ho-hum.

I am still trying to figure out the plot…There were no great scenes or special effects. The planet’s climate control satellites begin to malfunction. This causes catastrophic weather to develop around the world causing the air to go into a deep freeze where it’s normally hot, tides climb to outrageous heights and come ashore to destroy sky scraper buildings in places like Dubai. Where the weather is normally cold, everything melts. A Satellite designer (Gerard Butler) races to save the day! The story unfolds from there…

“London has Fallen” is an “Action Junkie’s” Dream!

At the order of the US President a drone strike attempts to take out an internationally known Terrorist. It’s believed that the strike was successful, so no further Surveillance was ordered after the strike.

Fast forward two years, an announcement that the British Prime Minister has died causes a major stir among world leaders. Everyone makes plans to descend on London to pay their respects. Security is extremely high given the importance and severity of the situation. The leaders start to arrive in London. The story unfolds from there…

“London Has Fallen” is not quite as bad as the paid critics indicated.
There is a plot, a story, tons of action, suspense and intrigue.

The only problem is that a lot of the events couldn’t possibly happen in the real world. Agent Banning (Gerard Butler) tries to come across as a Presidential James Bond, but he lacks the charisma to pull it off and the movie is a bit short at 1:39.

The action is non-stop. You won’t be bored. I thought Morgan Freeman was pretty good as the Vice President. I still think the movie is worth at least 2 1/2 stars.

At the writing of this review I am undecided as to whether I like “Olympus Has Fallen” or not. There are a few good elements about the movie, but there are also an equal number of bad elements about the movie and that’s what makes it difficult. The Cast is HUGH and are all excellent actors.
On a nice July day the unthinkable happens, an extreme terrorist and his army invade the air space around the White House. The army is well armed and knows all of our secret weapons and how they operate. President Benjamin Asher (Aaron Eckhart) and most of his key staff are taken hostage in the White House bunker.
Fortunately for President Asher, one of his former security officers Mike Banning (Gerard Butler) happens to arrive and is able to get inside the White House undetected before everything is shut down.
Banning needs to locate the President’s young son and rescue the President before the extremists unleash their intended plan on the US. The story unfolds from there…

Think “Die Hard” at the White House. This is what “Olympus Has Fallen” will remind you of. Security Officer Mike Banning (Gerard Butler) is John McCain (Bruce Willis).
The difference is “Die Hard” was more interesting while “Olympus Has Fallen” has a bigger cast. The plot is mildly interesting. There is some cool artillery that is used. The movie is very bloody and in your face violent. A bright spot is that Morgan Freeman, Angela Bassett and Gerard Butler are excellent.
But, with all of that being said, this has been done before. Only the venue is different. It’s really sad that you have a ton of great actors/actresses and the movie is borderline mediocre. I found my self checking my watch on a couple of different occasions during the movie. If I do that, it’s not a good sign.

The paid critics were brutal to say the least regarding “Playing for Keeps”, giving it a zero out of 100 on Rotten Tomatoes and basically a 32 out of 100 everywhere else, but I went to see it anyway hoping they were wrong.
Gerard Butler plays an out of work former professional Soccer star. He returns to his home town to try and put his life back together, be a father to his young son and find gainful employment. Problems arise along the way and the feelings he has for his ex (Jessica Biel) that he thought were buried rise to the surface, while she is about to marry someone else. The story unfolds from there…
Severely disjointed and only mildly entertaining, “Playing for Keeps” is nothing more then an over done story that we have seen many many times before. It’s a predictable 95 minutes and definitely not worth the money.
Wait for “Playing for Keeps” to surface on DVD or Blueray.