“Bloodshot” is based on the best-selling comic book of the same name. Vin Diesel is Ray Garrison a decorated Soldier who gets killed in the line of duty. Ray is brought back to life by the RST Corporation. Loaded with a lot of nano-technology in his veins Ray is stronger than ever and is able to heal quickly if injured.

Although Ray is not in complete control of his mind and that’s where the problems start. The RST Corporation can alter Ray’s memories at any given time. Ray does not know what is real and what isn’t, but he is determined to get to the bottom of the situation. The story unfolds from there…

There is no plot. No solid story, but tons of non-stop action and special effects. The Cinematography was on point! It’s a bit sad…I had high hopes for “Bloodshot”. I counted down the minutes to when I could leave the theater. Vin Diesel does a good job with what he was given, but he isn’t the only person in the movie.

“Bloodshot” is best viewed on Cable, Blu-Ray or DVD. 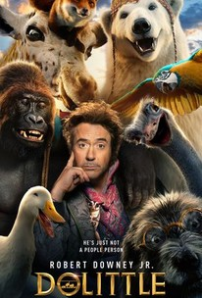 After losing his wife seven years earlier, Dr. Dolittle became a hermit, hiding away from the public eye. His only companions are the animals that he previously cared for. He talks to them and plays with them.

A messenger from the Queen summons Dr. Dolittle when the young queen falls ill and no one is able to determine what is wrong. Once Dr. Dolittle diagnoses the symptoms the queen exhibits, he then goes on a journey to locate a cure. The story unfolds from there…

“Dolittle” is definitely not Robert Downey Jr’s best work. During most of the movie the dialog from Robert Downey Jr. is not understandable. There is some comic relief that comes from the animals, but there aren’t any other redeemable qualities about the movie. It seems like it was just thrown together with no thought about a plot.

Young children may find “Dolittle” entertaining, but the movie is not worth the price of admission. The paid critics did not like “Dolittle”. I should have skipped it. 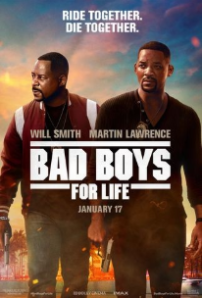 I was not writing movie reviews back in 1995 when the first “Bad Boys” hit the big screen. In fact I can’t remember if I liked the first installment or not. I can however confidently state that I do in fact like “Bad Boys for Life”.

It’s been twenty five years since Mike Lowery (Will Smith) and Marcus Burnett (Martin Lawrence) first became partners. Fast forward to 2020, Mike and Marcus get together for one last ride…

This installment of the Bad Boy franchise is really good. The movie is fun to watch from start to finish. There is a back story that is carefully laid out, but there is a hole in the plot that does not quite get filled. However that does not take away from the entertainment factor of the movie. There is plenty of action, crazy car and motorcycle chases, but brace yourself…Things do get bloody. The cinematography is on point. The comic relief is alive and well.

I recommend “Bad Boys for Life” for some fun entertainment during this MLK Day Holiday weekend.

“Star Wars: The Rise of Skywalker” sans the slow start and the dead spots is an entertaining extravaganza with tons of special effects, great cinematography and plenty of outer space action. I found this installment to be much better than the previous a couple of years ago.
The plot is a bit confusing, but that does not stop the entertainment factor of the movie.
This installment is a nice conclusion to the Star Wars Series. Many old familiar faces reappear.

If you are a fan of the Star Wars Series, you will not want to miss “Star Wars: The Rise of Skywalker”

Academy Award winners Matt Damon and Christian Bale bring the true story of the visionary American car designer Carroll Shelby (Damon) and the fearless British Driver Ken Miles (Bale) story to life on the big screen. They battle corporate interference, the laws of physics and gravity to build a revolutionary race car for Ford Motor Company. They then take on the dominating race cars of Enzo Ferrari at the 24 Hours of Le Mans in France in 1966. The story unfolds from there…

“Ford v Ferrari” is everything I had hoped it would be. The movie is very entertaining, emotional, moving and just plain fun to watch. The cinematography is excellent. This movie contains one of the best cast I have seen this year. Strong performances from Matt Damon and Christian Bale make this movie what it is.

“Ford v Ferrari” is definitely a must see movie.

Another reboot of the TV classic “Charlie’s Angels”. I guess it’s if you don’t succeed try, try again until you do.

Sabina, Elena and Jane are working for the mysterious Charles Townsend Agency that has successfully taken the security and investigation business International. There are many “Bosley’s stationed around the world.

Elena is a Systems Engineer for a scientific company who has developed a device that can be told what to do and the device will do it. This includes everything from turning on lights to killing people… Of course the device falls into the wrong hands and there are many people trying to buy or get their hands on the device at any means possible. So in comes Charlie’s Angels to the rescue. The story unfolds from there…
The plot is good, it’s the execution of the plot that is the problem with “Charlie’s Angels”. The story has holes that don’t get filled. The cinematography is not that great. There are some missed opportunities to showcase places like Istanbul and London. Some of the action scenes are hard to follow. There is also some bad acting that also contributes to the problems with “Charlie’s Angels”.

Charlie’s Angels is best left on the small screen.

We can watch the reruns of the original Charles Townsend Agency. 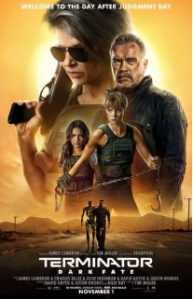 It’s been over 20 years since Sarah Conner (Linda Hamilton) halted Judgement Day and changed the future for the human race. Now she is going to have to get involved again. The machines have targeted Dani Ramos (Mackenzie Davis) who is living a simple life in Mexico City with her brother and father.
The machines believe that Dani represents the future and they cannot let that happen. A super enhanced human named Grace also arrives in Mexico City. Together Grace and Sarah must save Dani from the machines. The story unfolds from there…

“Terminator: Dark Fate” is an excellent re-boot to this franchise. It has non-stop edge of your seat action and violence. The movie is very entertaining. Great special effects and a good back story tie-in help boost this movie. This installment is definitely better than the previous reboots.

“Terminator: Dark Fate” is definitely worth a look. 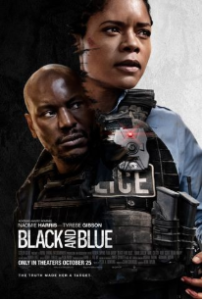 “Black and Blue” is a fast-paced action thriller with many twists and turns.

Alicia West (Naomie Harris) is a rookie cop on the New Orleans Police Department who accidentally observes several fellow officers killing some questionable people execution style. Once her fellow officers realize they have been caught, they try to kill Alicia, but she gets away. The story unfolds from there…

“Black and Blue” would be an awesome movie had there been a back story and more depth into the key characters. There are several unfinished mini stories that you have to use you own imagination as to what may have happened in the past to lead them to where they are today.
All of that being said, the movie has non-stop action, intrigue and is worth checking out.

She’s Back!! “Maleficent: Mistress of Evil” is a visual feast!!

After Maleficent’s goddaughter Aurora gets engaged to Prince Phillip, they each start questioning the complex matters of family. Aurora wants Maleficent to meet the King and Queen and do all of the things that a mother would do when her daughter gets engaged. Little does Aurora know her godmother already knows the King and Queen all to-well. Additionally the hatred between man and the fairies still continues. The story unfolds from there…

As I stated in my opening “Maleficent: Mistress of Evil” is a visual feast. The cinematography, action and special effects are on point. There is a lot of new ground to cover in this second installment. There are many new cast members and you get a peek at what may be Maleficent’s back story.

The movie is quite enjoyable. It’s sad that it took so long for this sequel. It’s been 5 years since the 2014 Global Box Office hit “Maleficent” hit theaters.
The paid critics didn’t seem to like this installment, but I think it’s worth a look.